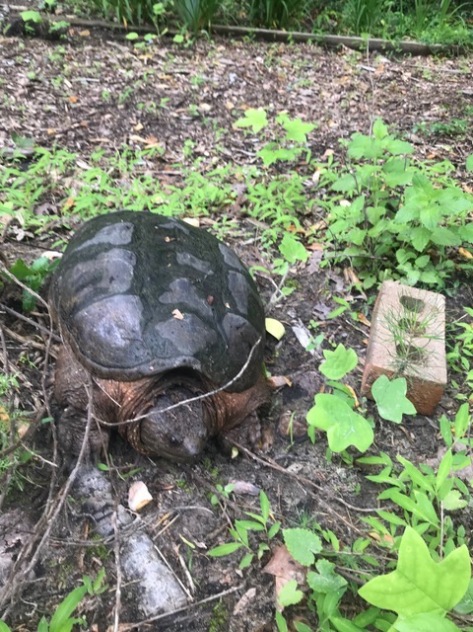 A friend texted me this morning, while I was busy procrastinating: “Since I know you love nature, would you like to come see a snapping turtle in our garden?” Of course! My husband and I dropped everything, and walked down the street to our neighbor’s garden (which is a fantastic wildlife and child friendly garden! But I’ll write about that another day). There, trying to dig her way under leaf litter close to a young hydrangea near a tree, was a snapping turtle bigger than a dinner plate.

Ordinarily, none of us would be too worried about snapping turtles – although…. my neighbor had been surprised by the turtle while she was working in the garden less than a foot away. We know what to do – avoid them and let them do their thing! However, we all have small children. I won’t speak for her children, who are very polite and well-behaved, but I can say for sure that my 7 yr old, who is an extremely active and curious and probably over confident child, would immediately try to pick up such a large turtle.

So we discussed the options. We all believed that she lives in a nearby pond (where the kids go to catch tadpoles), but was probably out and about looking for somewhere to lay eggs. This garden, being much more naturalistic than a yard coated in thick turf, and full of newly planted seedlings, probably appealed to her a great deal. We learned quickly that trying to move the turtle to another location is illegal. Naturalists advised us that after she lays her eggs, she’ll go back to her watery home.

So, the turtle is now a teachable moment. Where we had once been thinking to get rid of her in order to protect the children we are now going to have to do something that will probably serve them better: teach them about snapping turtles. Basically, they need to know how to identify a snapping turtle, where to be cautious of them, and, probably most importantly, to leave snapping turtles (and all other wildlife) alone, as much as possible. That’s a rule that benefits both the children and the wildlife!

That said, on the way back from lunch, I pulled over abruptly on a road leading to our house because two mature adult slides and a baby slider were in the middle of the road. Another lady stopped too, and together we moved the turtles out of the road in the general direction they were traveling. So, there are times when it’s good to stop and touch the wildlife!